Today I went up north to my mate Robbie's for a game of Pike and Shotte. We'd arranged the game at the York show and today was the day. Tom came over as he's moved up that way, along with John and Colin. Robbie had arranged to fight Pavia, a straight refight using the set up from the book. Rob would provide the French, I'd bring along the Imperialists.
On arrival we diced for sides, John and Colin would be on my side, Tom would partner Rob.
This is the site the slumbering French awoke to on the morning of Pavia, Imperialists emerging from the dawn. 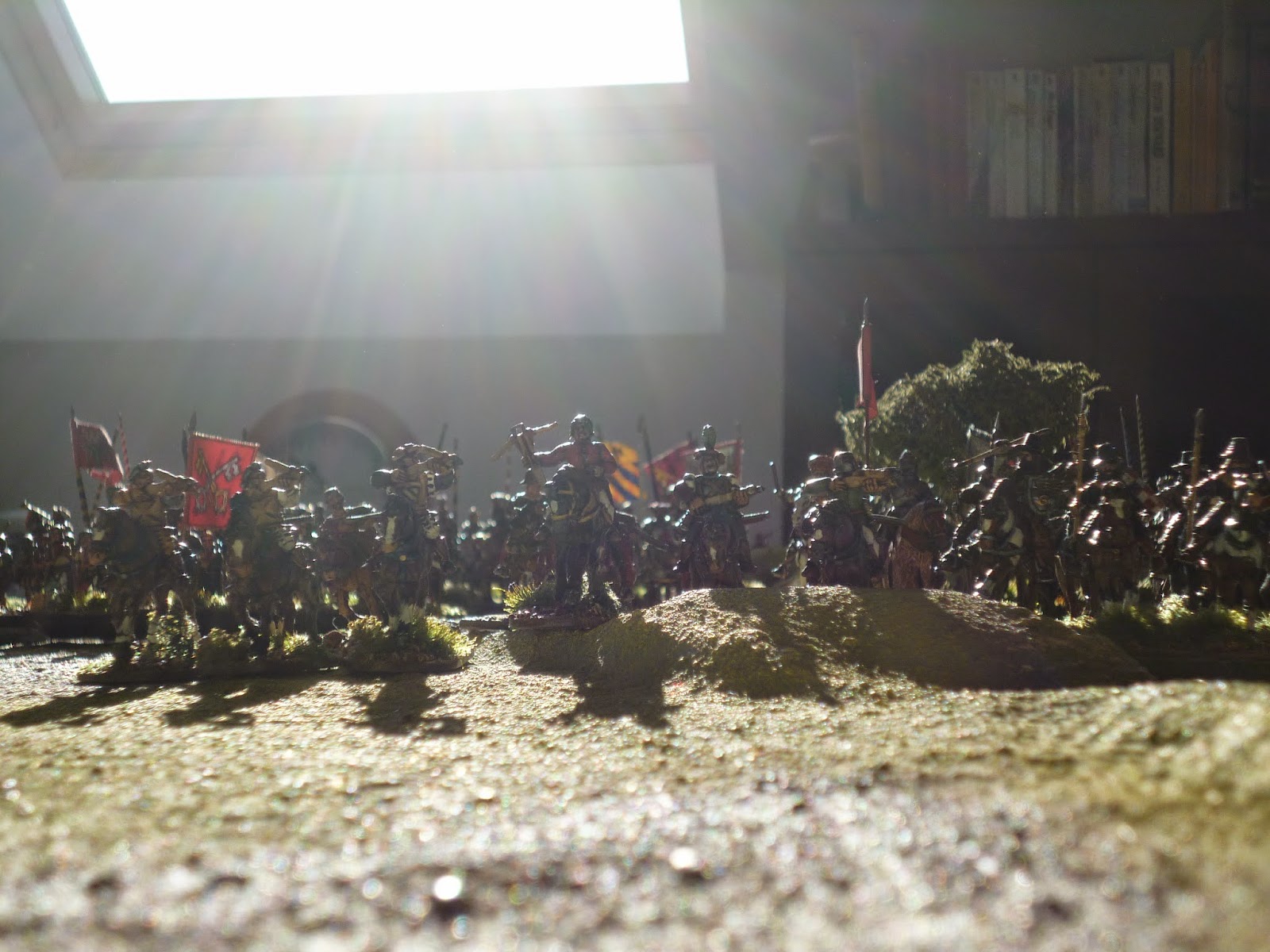 A view up the table, the French and Swiss are trying to pass their command rolls, and failing miserably, much to the Imperialist amusement!
Johns' Italian and Spanish can be seen advancing on the right, my Landsknechtes advance (slowly) in the centre. 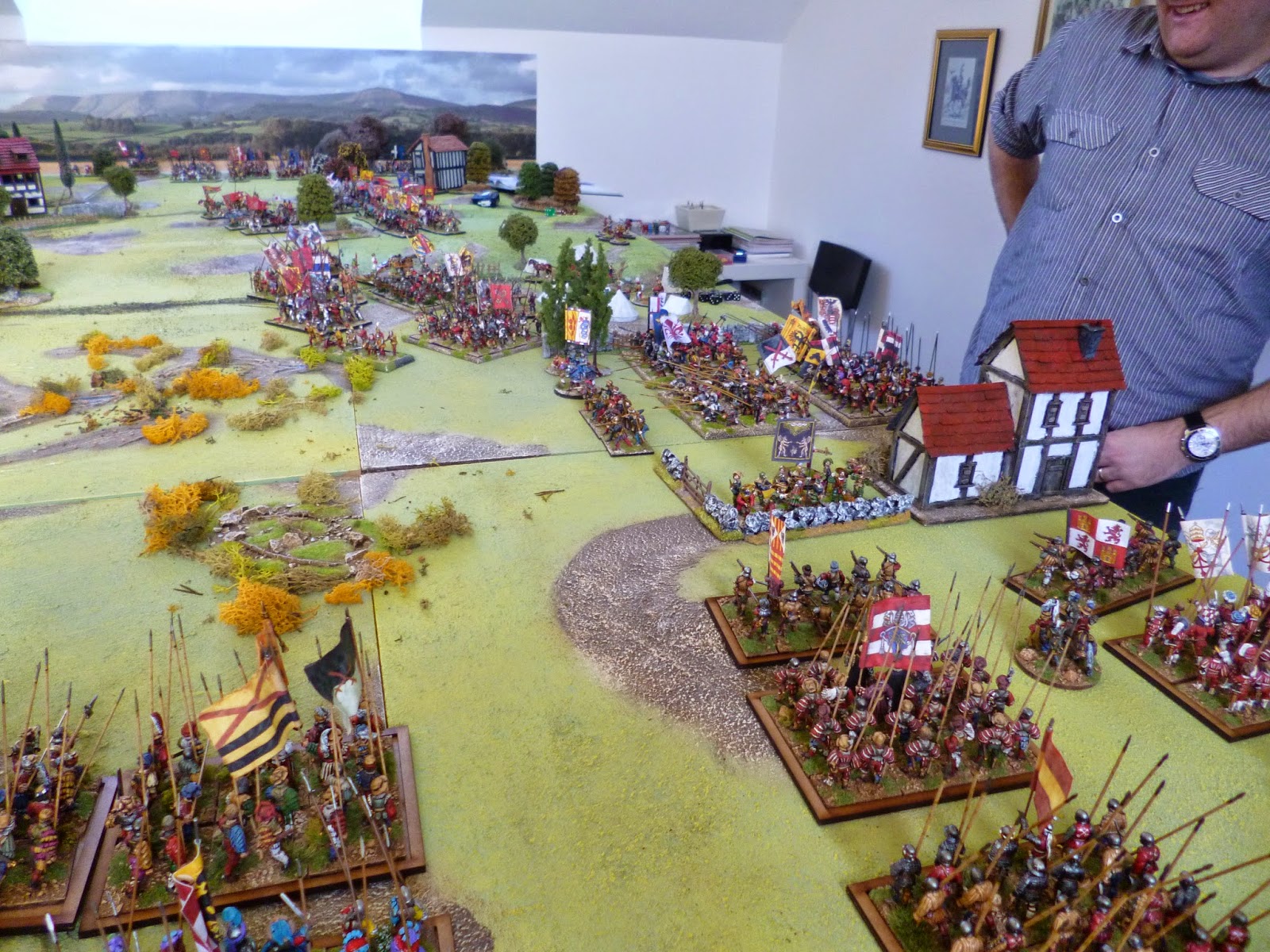 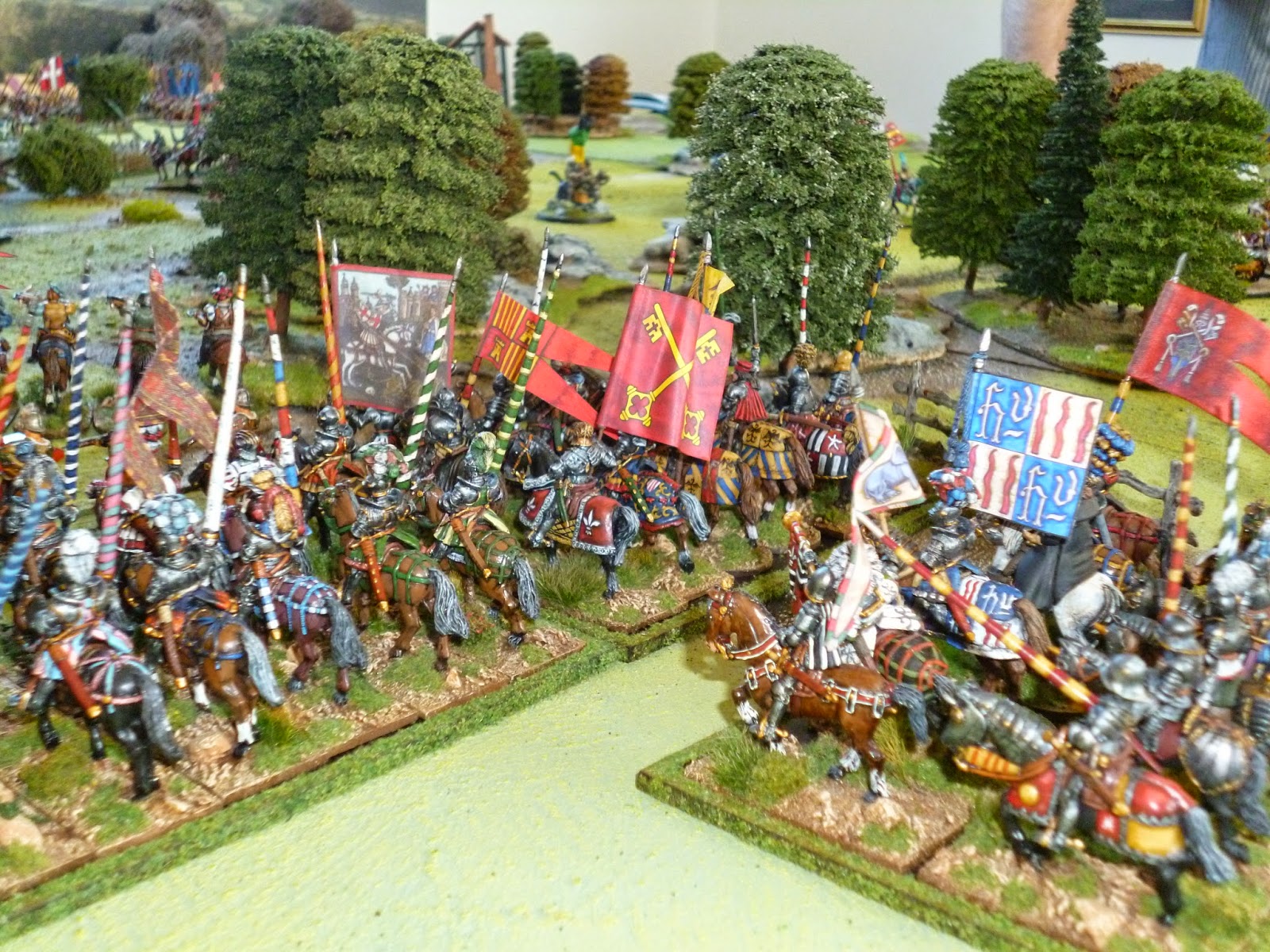 Only to be met by the cream of the French Nobility screened by Stradiots.
This was going to be a see saw engagement all day.
﻿ 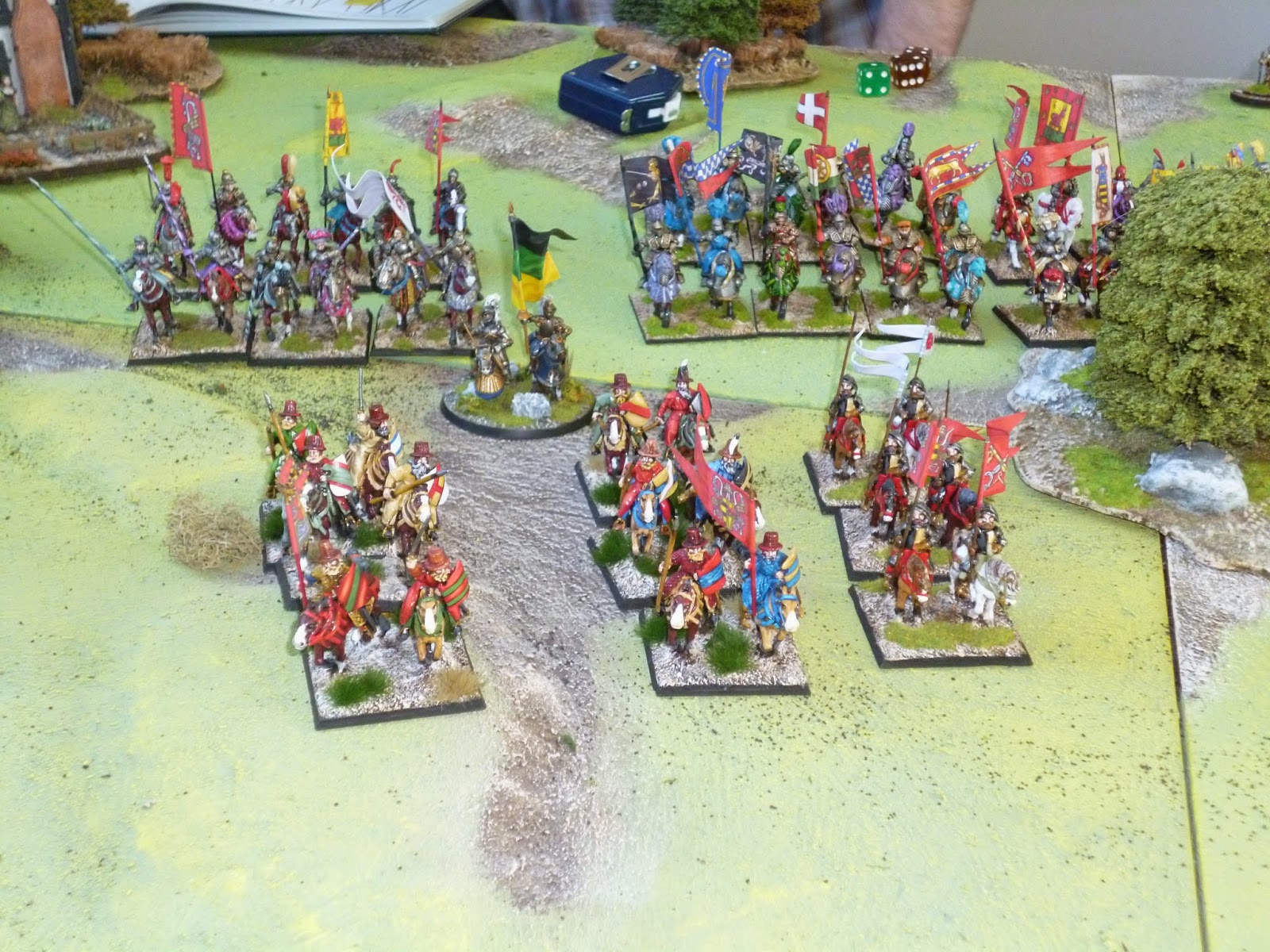 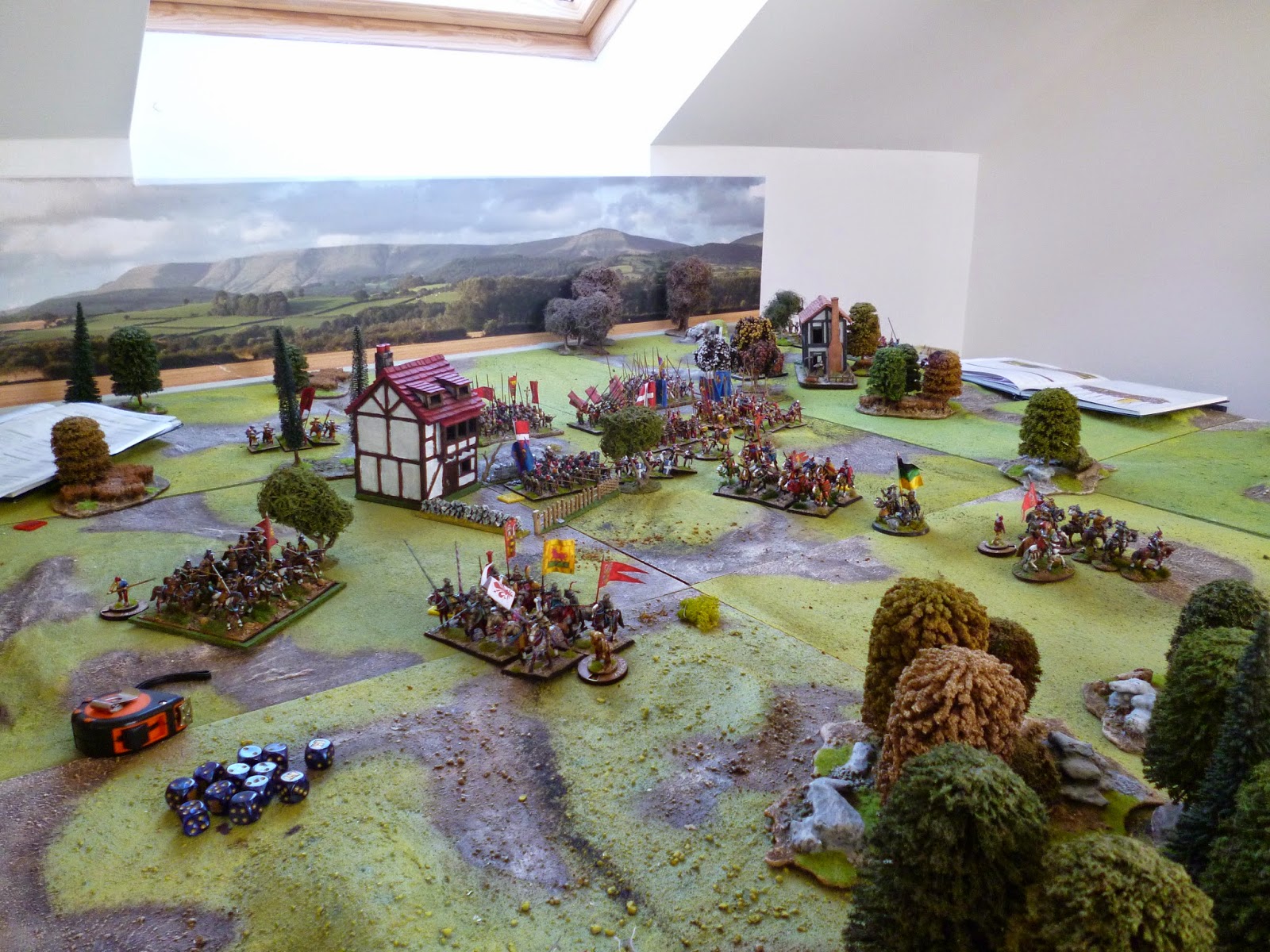 Rob being embarrassed after ANOTHER lucky dice roll. 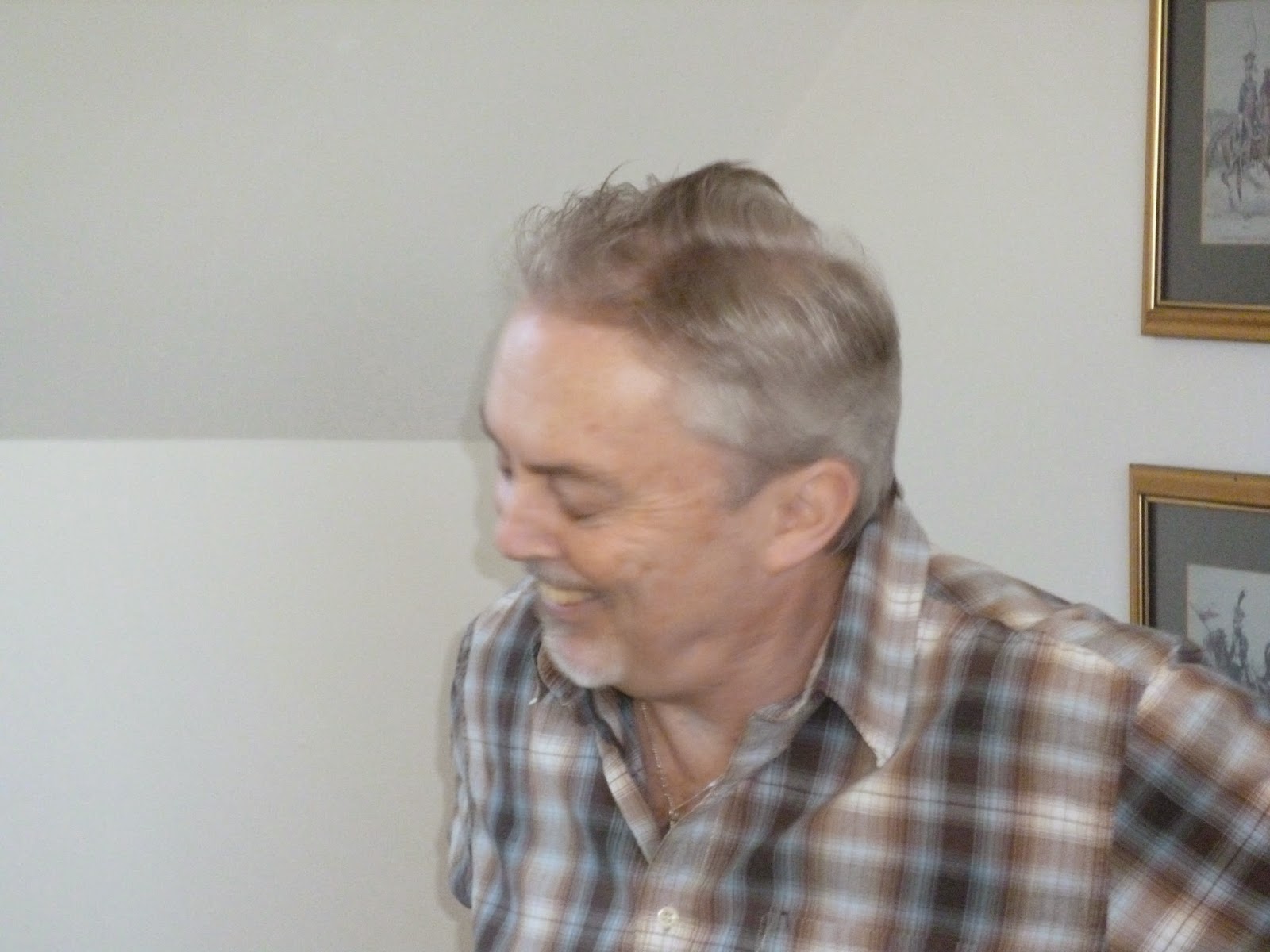 The Landsknechtes get stuck in to Toms Swiss in the centre.
﻿ 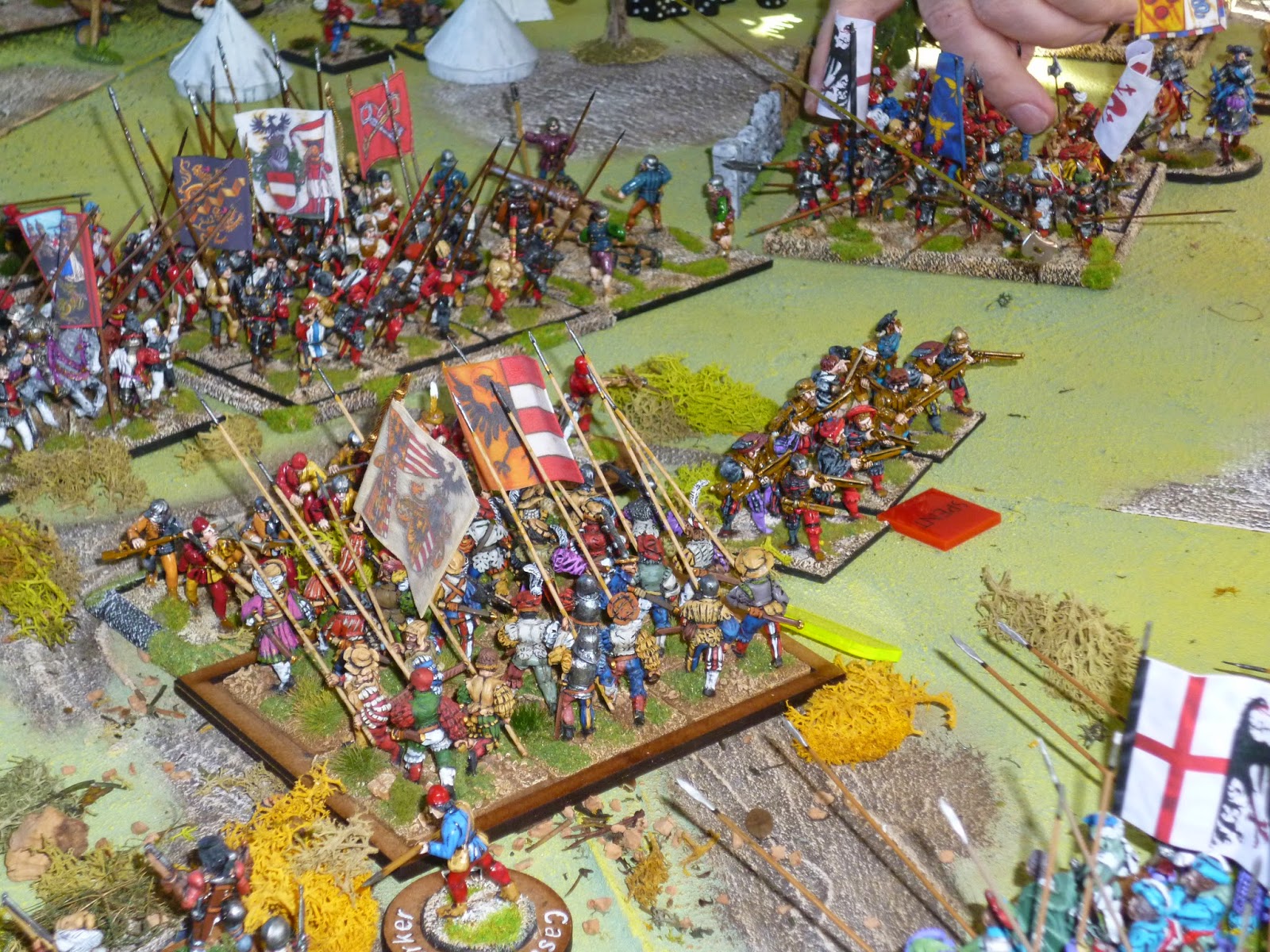 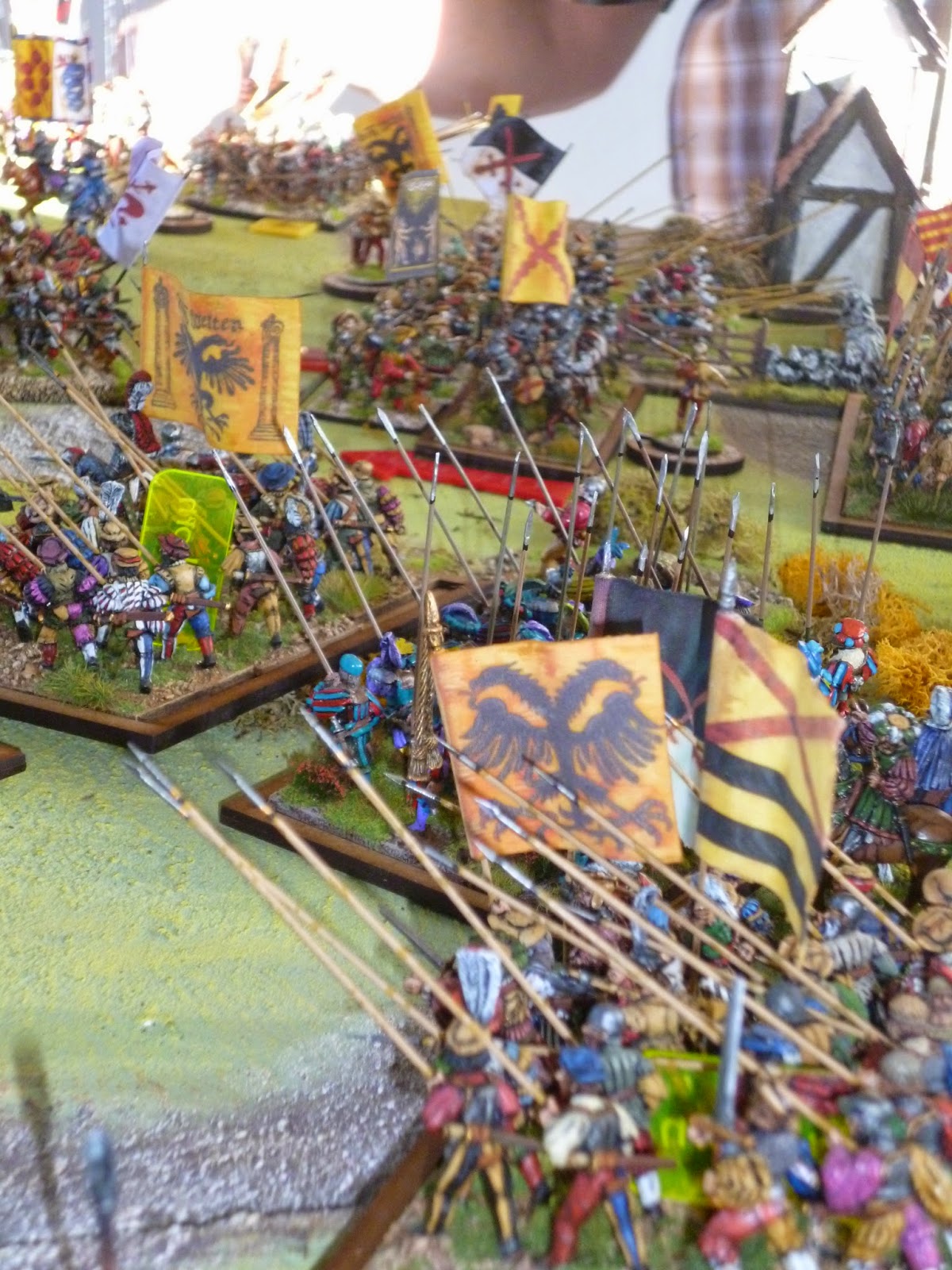 The Swiss arquebusiers first hold up Frundsbergs pike block then push them back, eventually breaking the command, they didn't even need the Swiss pikes!!! 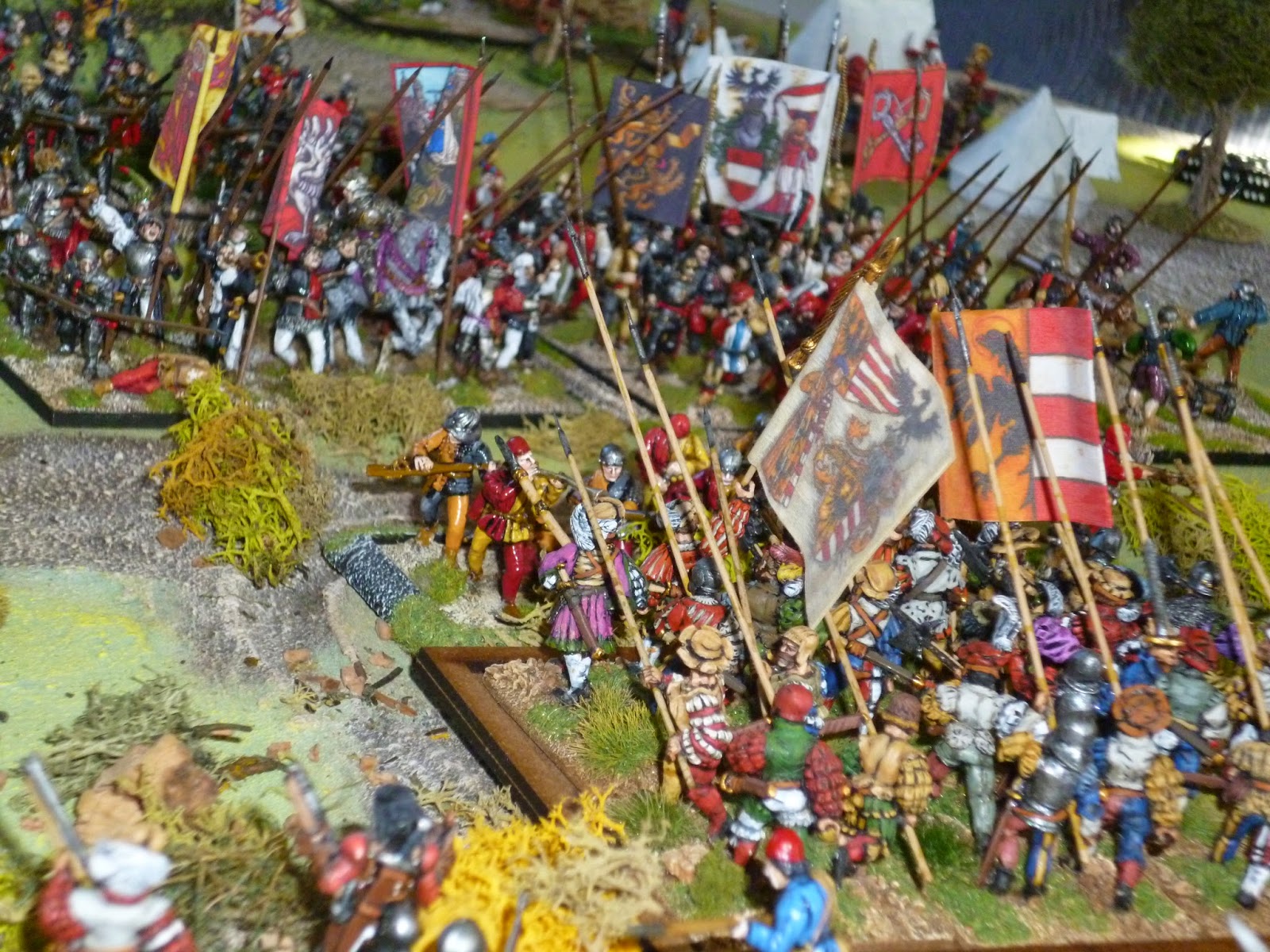 Frundsbergs command falling back after losing two pike blocks and having three Shaken units are finished as an effective fighting force. 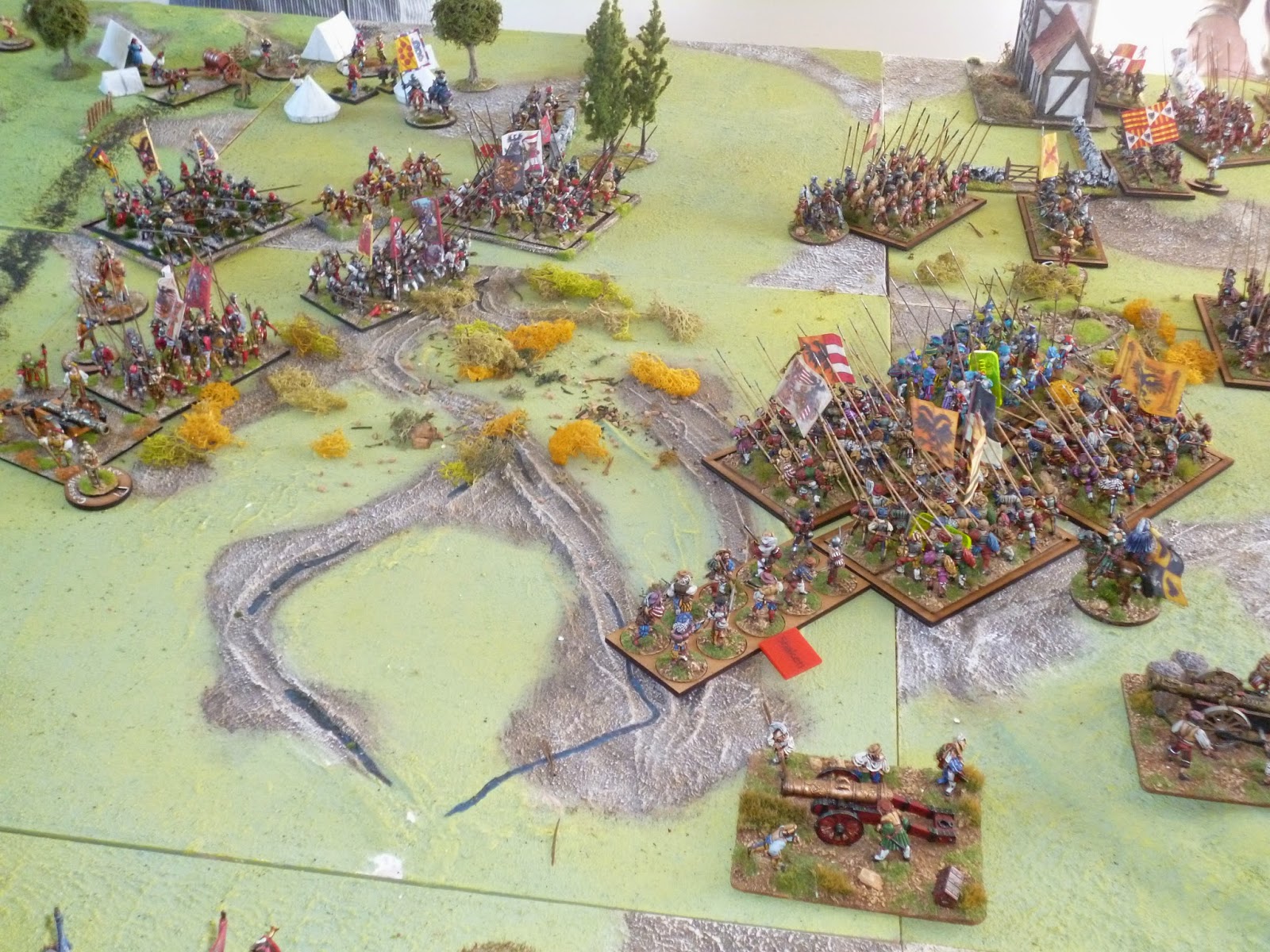 During the game Robs C-in-C had been killed along with his Gendarmes, Colin had taken the wood and secured the left flank, John had broken the Black Bande and taken the French Command post, this gave us enough victory points to win even though Tom had held up and pushed back my Landsknechtes in the centre.
I'm still not sure about Pike and Shotte but it gives the opportunity to have a big game with minimum fuss. I'll give them another couple of goes to see if I can get my head round them, otherwise they'll be Ebay bound.
Rob, John and Colin have very good blogs, which can be found here-
http://slimreidy1.blogspot.co.uk/
http://independentwargamesgroup.blogspot.co.uk/
http://carryingsonupthedale.blogspot.co.uk/